Now, the word “Trump” these days can often be the cause of many a debate due to his controversial political stance – and his purchase of Turnberry Resort back in 2014 has been clouded with criticism.

All this being said it was not going to put me off taking a trip down the Ayrshire coast and experience for myself the £150 million refurbishment completed in August 2016. The resort holds a very special place in my heart as I got married there back in August 2012. This was our first visit since that day and it was one we were both looking forward to. Well, once I eventually managed to persuade Nadia (my wife) to have our first night away on our own since our son Harry was born – nearly 2 years ago!

Back in 2012 one of the main reasons we chose the hotel as our wedding venue was not only the hotel itself- but the location overlooking the Ailsa Craig is out of this world. The hotel is obviously very famous for its golf, however we are not golf fans so the sheer luxuriousness was enough for us.

Before we arrived I was finding it hard to imagine how the hotel was going to improve – well how wrong could I be! I have always felt that the Turnberry Resort is the epitome of what a 5-star hotel should be and all I can say is this visit only cemented this opinion.

From arriving at the hotel with the valet parking and the concierge on hand to take your bags to your room. To then being sat down at one of the check-in desks where you are greeted with some cold water and homemade short bread – not a bad start to the break! You instantly get the impression that there has been no expense spared. Check-in was seamless and all  done on a large i-Pad which I found pretty cool. There was a lot of hotel staff present which was good as the hotel was very busy.

Our room was not quite ready when we arrived so we were advised to take a seat in the bar and they would call us when our room was ready. So we duly sat in the bar at a table overlooking the golf course enjoying a few quiet drinks – when you have kids you really need to cherish these moments of peace and quiet! We also bumped in to some friends of ours so was nice to relax and have some adult conversation.

Now, one thing I will mention though is Mr Trump may be trying to re-coup his millions through the sales of beer, vodka and club sandwiches. During our time in the bar we had ordered 2 pints of St. Mungo lager (my favourite), 2 vodkas and 2 club sandwiches – this came to a total cost of £61.50 – which is rather on the steep side. However we felt it is all in keeping with the experience and it is not something you do every day (thankfully).

It was then time to head to our room which was on the second floor (room 230), this is one of their Ocean View Junior Suites. The room was outstanding and I feel the pictures below do not do it any justice. The bed was a Super King-size and there was the added bonus of a living area which was ideal for enjoying a pre-dinner drink or two (saving money going to the bar). The marble bathroom with separate shower, toilet and free-standing bath was simply stunning (the room also featured a 65-inch television – which I believe every room in the hotel has)! 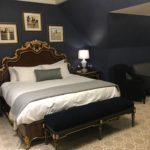 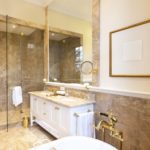 We had booked dinner in the 1906 Restaurant so we made our way down there for our table at 8pm. The deal we had booked through our website included the evening meal. Our friends who we had met earlier had booked through another website and were paying more just for bed & breakfast (after giving them a clip round the ear for not booking with us, I handed my business card over and demanded they book through our website next time!)

The starters were great however the main courses contained quite a lot of fish, which my wife can’t eat, so we decided to upgrade our meal to the Chateaubriand for two people which came with all the sides and a choice of two sauces. This was served at the table by the chef and washed down with a nice glass of red wine. In all my excitement I forgot to take a picture of the meal, however this is what was left over (not much as you can see!)

We finished dinner by about 9.30pm and in years gone by this would have been us just starting the night by heading to the bar until the early hours. However we could only think about one thing – get to bed for a nice uninterrupted sleep! We did however stop at the bar on the way to the room for a nightcap.

I literally couldn’t wait to get in to the massive bed – which I can only describe as being the comfiest ever! We were both asleep before midnight and managed to have a long lie until about 8am! I wanted to check what the weather was like and decided there could be worse views to wake up to.

We were in a very lazy mood and could not be bothered getting ready for breakfast so we decided to order it to the room (for a small tray charge of £4), which arrived about 30 minutes later. It was awesome!

After breakfast it was time to get ready and head home to see our boy. I could however have easily stayed another night! We took the coast road back to Glasgow which was a lovely drive.

In summary, whether you love him or hate him there is no denying that this place is stunning. There has been much bad press over the past few years about the hotel and its owner, however if you can forget about this and appreciate it for what it is – a truly fantastic hotel and golf resort – then I would highly recommend a short break at Trump Turnberry. Every little detail from the furnishings to the decor and the service all come together nicely for an amazing five-star experience. After all it’s not every day you can say you have stayed in a hotel owned by the President of the United States!

We have many deals and offers running throughout the year at Trump Turnberry Resort Scotland, so come and check out our latest deals here