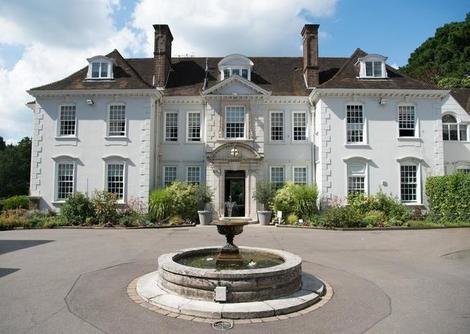 Gorse Hill Hotel is a hidden gem that offers a relaxed and intimate sanctuary for those looking to escape to the beautiful Surrey countryside.

The Gorse Hill Hotel in Woking is an elegant Edwardian style mansion built in 1912, surrounded by beautiful green gardens yet only a few minutes from the centre of Woking. Located between the M25 and M3 also allows easy access from this 4 star hotel in Surrey to London and a number of local attraction. Gorse Hill is also idea for those looking for a golfing break as Woking Golf Club is right on the hotel’s doorstep.

With a choice of 50 ensuite bedrooms located across the original mansion and courtyard building Gorse Hill has a great variety of options when looking for accommodation in Surrey. Relax in the peace and quiet of your comfortable, thoughtfully furnished bedroom complete with modern amenities including free wifi, a tea and coffee tray, iron, hair dryer, and TV.

Gorse Hill Restaurant presents a simple yet refined menu for guests to savour, serving up satisfying food in a relaxing atmosphere. Each dish is freshly prepared; from roasted pork belly, sticky red cabbage, and apple fritters to crispy skin sea bass, braised leeks and saffron potatoes. Enjoy a selection of wine, beer, and expertly crafted cocktails, and relax after a full day of work or play in the Gorse Hill Bar and watch the news or the big match on the large screen TVs.

Keep up with your fitness routine whilst you’re away with the free in-house gym.

Thoughtfully furnished, the comfortable rooms all feature modern amenities and are ideal base for work or leisure in Surrey. Amenities include free Internet access, a tea and coffee tray, iron, hair dryer, and TV.

Comfort and style await in the Deluxe Rooms. Enjoy more space than the Standard Rooms, with all the modern amenities expected by today’s business or leisure traveller.

Prepared with productivity in mind, the Gorse Hill Restaurant presents a simple yet refined menu for guests to savour, serving up satisfying food in a relaxing atmosphere.

Enjoy a selection of wine, beer, and expertly crafted cocktails, and relax after a full day of work or play in the Gorse Hill Bar and watch the news or the big match on thelarge screen TVs.

Keep up with your fitness routine whilst you’re away with the free in-house gym.

Packed with cardio and resistance equipment and free weights, you can unwind after a busy day. All guests over the age of 16 who visit Gorse Hill are invited to use the in-house gym to exercise and unwind.

With a mix of equipment and weights, the gym will cater to you whether you want to do a cardio workout, or if you want to give your muscles some strength training or toning exercises.

The hotel is located a few minutes from the centre of Woking and between the M25 and M3, offering easy access to London and a number of local attractions.

Pet Friendly:
Dogs are welcome at the Gorse Hill Hotel. There is a supplement charged of £5 per dog per night.

Family Accommodation:
Unfortunately there are no rooms suitable for families at this hotel. Guests can bring their own travel cot for a baby, however this may make some bedrooms tight for space.

Guildford Museum
Guildford Museum is the main museum is in the town of Guildford, Surrey, England. The museum is on Quarry Street, a narrow road lined by pre-1900 cottages running just off the pedestrianised High Street. This main site of the museum forms the gatehouse and annex of Guildford Castle, which the staff help to run. It is run by Guildford Borough Council and has free entry between 11am - 4.45pm on Monday to Saturday. It is closed on Sundays and on Christmas Day.

RHS Garden Wisley
The Horticultural Society's garden at Wisley in the English county of Surrey south of London, is one of four gardens run by the Society, the others being Harlow Carr, Hyde Hall and Rosemoor. Wisley is the second most visited paid entry garden in the United Kingdom after the Royal Botanic Gardens, Kew, with 959,434 visitors in the year to 31 January 2010.

Thorpe Park
Thorpe Park, styled THORPE PARK Resort, is a theme park with a hotel in between the towns of Chertsey and Staines-upon-Thames, located within the area of Surrey, Greater London, UK. It is operated and owned by Merlin Entertainments.

Windsor Castle
Windsor Castle is a royal residence at Windsor in the English county of Berkshire. It is notable for its long association with the English and later British royal family and for its architecture.

Ascot Racecourse
Ascot Racecourse is a British racecourse, located in Ascot, Berkshire, England, which is used for thoroughbred horse racing. It is one of the leading racecourses in the United Kingdom, hosting nine of Britain's 32 annual Group 1 horse races.

Birdworld
Birdworld is one of England's largest bird parks. Covering 26 acres, it is located south west of the town of Farnham, Surrey and close to the village of Rowledge. Birdworld includes an Underwater World and Jenny Wren children's farm.

For more information on things to see in and do in the area, check out our Destination Guide Here