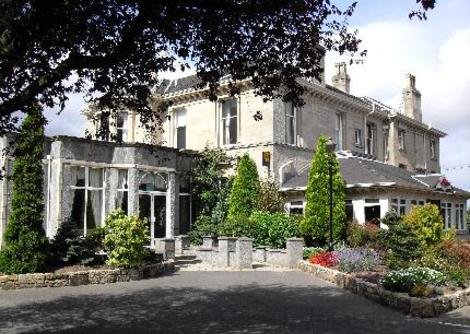 Grange Manor Hotel is set in landscaped gardens, with the look and feel of a country house hotel, on the outskirts of Grangemouth and Falkirk.

The Grange Manor Hotel is in the ideal location for exploring central Scotland due to its easy access to the motorway for Stirling, Glasgow, and Edinburgh. This 4-star country house hotel near Falkirk was built in the late 19th century for the Factor (or agent) to the Earl of Zetland's local estates. The Earl's own house, long since demolished, was just across the way although the Earl was seldom resident.

Grange Manor features 36 ensuite bedrooms which are all well equipped with all of the amenities you would expect - with complimentary wi-fi throughout. The 6 rooms in the manor house have recently been upgraded to a high standard offering the very finest luxury stay in the area.

At the Grange Manor, the restaurant is proud of its passionate brigade of Chefs. The team is dedicated to serving only the highest quality food, using the finest seasonal ingredients, and sourcing the best products available to us.

The Grange Manor Hotel in Grangemouth offers great late deals and special offers on short breaks throughout the year.

In the original house enjoy one of the six luxury and recently upgraded feature rooms, with many unusual and traditional features, these rooms are larger and can be ideal for that special occasion.

Dine with us and discover something special; a unique and specially crafted menu of seasonal dishes, prepared with the finest specially sourced ingredients.

Why not relax in the newly refurbished Earl's Bar with a glass of wine or sample one of the luxury whiskey's.

Cook’s Bar & Kitchen
Located on the grounds of the Grange Manor Hotel, the 19th Century coach house offers warm and stylish decor with a relaxed and welcoming atmosphere.

Open from 9am, seven days a week, the cooks kitchen serves food all day. Whether it be a home-cooked breakfast to start your day, a quick coffee and cake, or a delicious main meal, you'll find something for all occasions.

With 15 wines and champagnes by the glass and a very tempting cocktail list, there could be no better way of relaxing.

Take exit 6 (travelling east) or exit 5 (travelling west) off the M9 for the Grange Manor, located on the outskirts of Grangemouth.

Rooms - Please note this hotel does not have any rooms big enough to accommodate 3 adults.
All rooms have a shower over the bath.

Children's rates:  B&B is included in the rate and all other meals are paid as taken.

Local Attractions to the Grange Manor Hotel near Falkirk

The Falkirk Wheel
The World's first and only rotating boat lift. This modern and innovative structure, standing some 115 feet high, replaces 11 locks of canal travel of yesteryear which took a full day of a boatman's time to negotiate - now some 30/40 minutes.

The Helix & Kelpies
The Helix - transforming land between Grangemouth & Falkirk into an exciting outdoor recreational area for locals, businesses, and visitors to Falkirk.

Bannockburn Heritage Centre and Battlesite
A National Trust for Scotland site near Stirling. Social history displays and AV recreation of the famous battle in which Robert the Bruce defeated the English in 1314.

Linlithgow Palace
About 15 miles from the hotel, a splendid 15th-century ruin, and the birthplace of Mary, Queen of Scots.

Callander House
Once the home of the Jacobean Livingston clan, has a fascinating recreation of life 'below stairs' in their Georgian kitchens.

Built-in the 15th century by one of Scotland’s most powerful families, the Crichtons, Blackness was never destined as a peaceful lordly residence; its enduring roles were those of garrison fortress and state prison.

The Wallace Monument
For over 140 years, this world-famous landmark has towered over the Stirlingshire countryside. Today, it draws visitors with its exhibits and displays, telling the stirring story of Sir William Wallace, Scotland's most celebrated hero.

Stirling Castle, Stirling
High on the skyline, dominating the landscape for miles around, Stirling Castle is a great symbol of Scottish independence and a real source of national pride. A place of power, beauty, and history, come and discover the favoured residence of Scotlands Kings and Queens.

Deep Sea World, North Queensferry
Under the iconic Forth Road bridge in North Queensferry, the National Aquarium of Scotland features a fun underwater tunnel, a family of barking seals, some very scary, toothy sharks, and much, much more for the whole family to enjoy.

Edinburgh Castle, Edinburgh
Edinburgh Castle is surely Scotlands most iconic building. With its oldest sections dating back as far as the 12th century, its steeped in layers and layers of Scottish history. No visit to Edinburgh is really complete without a couple of hours spent exploring its ramparts, dungeons, tiny chapel, and magnificent Crown Jewels. And don't forget to watch (and hear) the firing of the one o clock gun.

Edinburgh Dungeon
Dare to take the kids on a gruesome journey to the scary depths of the Edinburgh Dungeon. Come face-to-face with some very convincing actors, eye-raising shows, and interactive special effects. It's a truly bone-chilling experience. Remember, The Dungeon is not suitable for people of a nervous disposition or very young children.

Edinburgh Zoo, Edinburgh
For a great day out, you can't beat all the fascinating wildlife at Edinburgh Zoo. World-class attractions and an extensive collection will delight the whole family with memories to last a lifetime.

For more information on things to see in and do in the area, check out our Destination Guide

FAQ
What are the children's rates?
B&B is included in the rate and all other meals are paid as taken.
Can I book a room with a walk in shower?
No, all rooms have a shower over the bath at the Grange Manor Hotel.
Do you have accessible rooms?
Grange Manor has two partially adapted accessible rooms, with showers over baths. Please call 01357 529129 to confirm availability before booking.
Loading your tailored rates…
We use cookies to ensure that we give you the best experience on our website. If you continue without changing your settings, we'll assume that you are on board with our cookie policy however, if you would like to, you can change your cookie settings at any time.