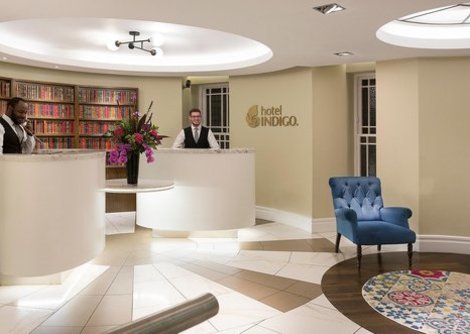 Located in the heart of Edinburgh’s New Town, Hotel Indigo on Edinburgh’s Princes Street offers contemporary style blended with the buildings Victorian heritage. Relax in stylish city centre accommodation, grab a window booth in the cocktail bar and watch the city go by or curl up in a comfy armchair with a novel from the hotel’s own library.

The Hotel Indigo Princes Street in Edinburgh is located in the very heart of this famous Scottish city. The elegant Victorian façade of this four star hotel in Edinburgh opens onto the city’s main shopping street, with stunning views of Edinburgh Castle and the striking Old Town skyline. Throughout the Hotel Indigo you will see nod’s to the city’s literary heritage within the interiors of the public areas and bedrooms.

In the sleek restaurant Twenty Princes Street, the head chef and his team have created a menu offering delicious seafood dishes and steaks using a Josper Grill, as well as using fresh, seasonal Scottish produce. For smaller plates and inventive concoctions grab a booth in the hotel’s Juniper Bar.

The Twenty Restaurant at Hotel Indigo Princes Street demonstrates culinary flair with an inventive menu that keeps pace with the seasons and uses only the finest locally sourced ingredients.

There is an exciting choice of fish and seafood dishes while the selection of Scottish steaks is a signature of the restaurant. One of the most eye catching elements is the stunning ornate ceiling which has been sympathetically reinstated and dazzling crystal chandeliers loom majestically overhead in this large yet, intimate space.

Juniper Bar
Juniper dares to be different and serves concoctions that push the boundaries. The vision is clear – to experiment, to explore, to play with flavour combinations – and not to take themselves too seriously!

With fresh,new flavours and combinations as well as offering the comfort and familiarity of traditional favourites. The team are passionate about cocktails and this is reflected in every one that is served! Try one of the amazing creations – you’ll not be disappointed!

The hotel can be found on the world-famous Princes Street, while also being conveniently located adjacent to Waverley Mainline Train Station.

Parking: As a city centre hotel Hotel Indigo does not have it's own dedicated parking. Parking is available across a number of multi storey sites with the closest at 0.7 miles being the Q-Car Park at Omni Centre. The Q-parking has 24 hours access.

Please note that the free WiFi is limited. Guests can enjoy high-speed premium WiFi at an extra cost.

The hotel's restaurant can be very busy therefere pre booking a time for dinner is advised.

Collective
A five-minute stroll from the hotel at the top of Calton Hill, Collective showcases emerging artists in the William Playfair-designed City Observatory. Enjoy exhibitions of newly commissioned art in the City Dome and warm up with a Cuban Alturo coffee and house-baked cake in open-air café MILK.

The Scott Monument
Power up 287 steps to the top of the Scott Monument, just streets away from the hotel in Princes Street Gardens. The Gothic tower is dedicated to writer Sir Walter Scott, and you can keep your eyes peeled for statues of 64 characters from Scott's novels. Panoramic views of Edinburgh and the Firth of Forth reward your climb.

Scottish National Portrait Gallery
Familiar faces greet you at every turn in the world's original purpose-built portrait gallery, which opened in 1889. Architecture fans can snap shots of the building's intricate Arts and Crafts design. Inside, celebrated Scots like Robert Burns, Bonnie Prince Charlie and Billy Connolly gaze at you from the walls.

A Concert at the Usher Hall
It's less than a mile from the hotel to this striking Beaux Arts, copper-roofed concert hall. Completed in 1914, the venue stages an eclectic mix of performances, from rock and pop to jazz, blues, and classical works performed by the Royal Scottish National Orchestra and Scottish Chamber Orchestra.

Opera and Ballet at the Festival Theatre Edinburgh
Behind a modern glass facade, the ornate century-old auditorium of this theatre plays host to productions by Scottish Opera and Scottish Ballet. In summer, it's home to the Edinburgh International Festival, and throughout the year you might catch a top comedian, West End musical or variety show.

The Voodoo Rooms
A two-minute walk from the hotel, this venue combines a stylish bar and restaurant with intimate live-music spaces. Listen to jazz or blues over inventive cocktails in the black-and-gold-themed Speakeasy or dance along to up-and-coming Scottish bands and live DJs in the larger Ballroom.

Scotch Whisky Experience
Hop into a whisky barrel for a virtual distillery tour and an insight into whisky production. The venue displays a collection of more than 3,000 bottles, with the chance to swirl a dram round your mouth at the end of the tour. Dedicated aficionados can compare the flavours of four whiskies at morning masterclasses.

Edinburgh Gin Distillery
More a G&T person? Walk a few blocks from the hotel to the West End and duck into this basement gin distillery. Take a tour and sip a sample, or sign up to a three-hour gin-making workshop, where you can bottle a one-off custom gin. Hang out afterwards at Heads & Tales bar and order a Gin-It-Yourself cocktail.

FAQ
Can guests check in before 3pm?
Our check-in time is at 3 pm and we cannot guarantee an early check-in as it is always subject to availability, the hotel can store your luggage for you until your room is ready.
Is there a fridge in the rooms?
Yes, all rooms have a mini fridge.
Does the hotel have rooms with a sofa bed to accommodate 3 occupants?
I'm afraid the hotel has only double rooms, no family rooms are available.
Is there parking available at the hotel?
Due to the central location of the hotel, there is no parking available, there nearest car park is the Q-park OMNI on Greenside Row (EH1 3AN)
Loading your tailored rates…
We use cookies to ensure that we give you the best experience on our website. If you continue without changing your settings, we'll assume that you are on board with our cookie policy however, if you would like to, you can change your cookie settings at any time.