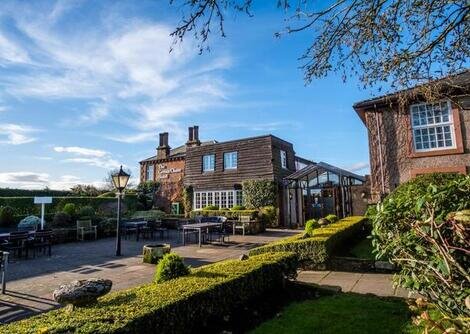 Located on the border between Scotland and England, The Gretna Chase Hotel offers guests excellent service, food and modern amenities.

The Gretna Chase Hotel is located in the famous Gretna Green on the border of Scotland and England. Gretna Chase was purpose-built as a hotel in the 1850’s which much of it’s original character still visible for guests to admire. Gretna is not all about weddings, spend the day shopping gat the Gretna Outlet Village or visit the World Famous Blacksmiths Shop.

Accommodation at The Gretna Chase Hotel consists of 20 en-suite guest bedrooms from the Bridal Suites to individually furnished rooms. Each of the large and well-appointed rooms offer all the modern amenities you would expect including complimentary Wifi, Tea and Coffee making facilities and flat screen television. Upgrade to a superior room or the bridal suite for the ultimate stay.

The onsite Bar and Restaurant at The Gretna Chase Hotel offers a range of dishes from Scottish classics to internationally inspired cuisine. On warmer days guests are welcome to dine al fresco in the garden. After exploring the local attractions or a day’s shopping, the hotel bar is the perfect place to relax with your favourite drink.

The Gretna Chase Hotel is of the highest possible standard, with a choice of individually furnished Deluxe and Superior rooms and Bridal suites.

Superior Rooms
Superior rooms are all individually furnished. They are large double rooms, and en-suite shower and bath facilities.

Bridal Suites
The honeymoon / bridal suites at Gretna Chase Hotel have everything you could need to ensure a comfortable and memorable stay. Traditional bridal four poster bed, seating area with generous space for you to get ready for your exciting day ahead. And when it's all over relax and enjoy some bubbles in our large whirlpool bath.

Meals at the Gretna Chase Hotel are served outside and in the traditional bar area.

Directions to the Gretna Chase Hotel

From the North (by road)
1. Look for brown signs on the M74 for the "Old Blacksmith's Shop Visitor Centre".
2. Take the exit after signs for Gretna (B7076) at the slip road.
3. At the roundabout, turn left and follow B7076 signs for Gretna, which go under the motorway.
4. At the junction, turn left, go straight through the traffic lights to a second roundabout.
5. Take the exit for Carlisle (M6)/Longtown (B7076).
6. The hotel is 800 yards on the left.

From the South (by road)
The hotel is located six miles north of Carlisle.
1. Exit at Junction 45 of the M6.
2. Follow the brown signs for the "Old Blacksmith's Shop Visitor Centre".
3. At the top of the slip road, turn left, and the hotel is 700 yards on the right.

Situated on the border between Scotland and England, The Gretna Chase Hotel is in an ideal location for exploring what both Dumfries and Galloway and Cumbria have to offer.

Gretna Green
Located in Gretna Green itself is the World Famous Old Blacksmith's Shop Centre. This features the Gretna Green Story Exhibition and a number of shops. If shopping is what you're after, then the Gretna Gateway Outlet Village is perfect - where you can find famous brands, such as Ralph Lauren, at discount prices

Moffat
The popular tourist town of Moffat is just over 30 miles north of Gretna. With its famous Woollen Mill, toffee and boating lake, Moffat is an ideal location for a day out. If scenery is what you're after, the Grey Mare's Tale waterfall, outside Moffat, is quite spectacular

Dumfries
Dumfries, only a short drive from Gretna, was the birthplace of Scotland's national poet, Robert Burns. There visitors can view his house, and see artefacts from the period. Ellisland Farm, the farmhouse which Burns built, also contains exhibits relating to the poet. Burns' final resting place is also located in Dumfries - at Burns' Mausoleum in St. Michael's Churchyard

Lochmaben
History can be found in abundance in the area. Lochmaben Castle, just a short journey north, was once the home of Robert the Bruce's family - indeed, the future King of Scotland was born there in 1274. In the winter of 1313, Robert the Bruce went into hiding in a cave on the nearby Cove Estate. While he was in the cave, suffering from the misery of defeat, he watched a spider trying to build a web - it kept falling, but kept attempting to complete the web again and again until it succeeded. This is thought to have been the origin of the famous saying, "If at first you don't succeed, try and try again."

Carlisle
Just 10 minutes south of Gretna is the historic city of Carlisle, with its magnificent Cathedral. The Cathedral was founded in 1122, and items of interest include the East Window with its tracery containing very fine 14th century stained glass. Whilst in Carlisle, visitors can also browse the Tullie House Museum and Art Gallery. This attraction gives a detailed and interesting history of Carlisle - with the spectacular Millennium Gallery offering a unique collection of local minerals, rare archaeological finds and interactive exhibits.

Further Afield
Birdoswald, in Cumbria, is the home of a Roman Fort, and where many begin walking alongside almost two miles of Hadrian's Wall. The Birdoswald Roman Fort would have housed 1000 soldiers. Today, the outside walls of the fort and the south, east and west gateways can be seen.

Slightly further afield, although not to be missed, is the magnificent Lake District. From the breathtaking scenery to the numerous outdoor activities, the Lake District provides a great backdrop for a perfect day out.