Our Hotel Product Manager, Claire, took a break at the Carnoustie Hotel, here is what she had to say:

After a hectic first half of 2017, to say I was in need of some rest and relaxation is an understatement. So when I spotted one of our great offers at Carnoustie Hotel, Golf & Spa I didn’t hesitate in getting booked up for a cheeky weekend away with the other half before the full mayhem of School Summer Holidays took hold.

Carnoustie is on the seafront, beyond Dundee on the east coast of Scotland in the region of Angus and it took us around 2 hours to make the journey up from South Lanarkshire. It was a pleasant summer evening so it was nice to take in the scenery as we traveled through Stirlingshire and Perth.

On arrival into town, Google maps took us through a few back streets and we suddenly “fell upon” the hotel when we came out of a side street so it didn’t have the allure of an imposing grand driveway on approach to the entrance that some other hotels have. However, it was an impressive looking building none-the-less though perhaps showing its age a little from the exterior or just suffering a little from a wild, windy winter.

The car park was ample for the size of the hotel and very handy for the entrance with lowered pavements making it easier to manoeuvre luggage (I know I was only going for 2 days but that’s still a lot of clothes and make-up!).

The entrance into the hotel opened up into a bright, airy reception area and we were greeted by Sarah. Sarah had a lovely, warm manner and was very informative about the facilities, breakfasting area, spa etc. Sarah then advised that we had been upgraded to the Padraig Harrington Suite which was a lovely surprise – always good when the staff member declares it as “her favourite room”!

As we had enough luggage for a fortnight in Florida we took the lift up to the second floor and found our room just along from the stairway.

On entry into the room, we were greeted by the most spectacular view of the first tee and it really was a sight to behold, especially on such a glorious Angus summer evening. From the window we could see right across the first few holes and just below the ledge we viewed the lovely outside drinks terrace. Such a birds-eye view meant that one of us could comment freely and with much aplomb about the quality or otherwise of the shots being played by the avid club-swingers whilst the other could pass remark on the fashion attire of the Carnoustie bourgeoisie. I will leave you to decide which was which…

As we had arrived quite late we decided not to dine in the hotel that night but instead to head up to see Carnoustie town to get a feel for the atmosphere on a Friday night. The town wasn’t overly busy but there was enough of a smattering of tourists and the Carnoustie teens to make it energetic enough without being too crowded at all.

We happened upon a lovely Asian restaurant called Thai Kitchen and decided to give that a go as it was quite unusual in appearance and was highly rated on a quick google search. And deservedly so as it turns out – the food was amazing, very Thai with lemongrass scents oozing from almost every dish. The service was efficient without being harried and even the house red wine was very palatable too. 2 courses with a bottle of wine each ( we were in for quite some time –  honest… ) came to around £40 each so fairly reasonable for high quality food, especially as I had prawn cake starter and roast duck curry main – amongst the pricier items on the menu.

We then headed back to the hotel and had a couple of drinks in the bar which was fairly quiet with just a couple of golfers exchanging tales of putts missed whilst mopping their “too-red” faces from a deceptively hot day in the Scottish sun. We then retired back to the room.

The room was indeed a lovely, modern room in many aspects. It had all the mod-cons that you would expect, slim line TV, WiFi, USB plug points, etc but still kept a traditional feel in keeping with the rest of the building.

I wouldn’t say that the beds were the biggest I’ve ever seen, possibly Queen size however they were very comfortable, even given the fact that myself and my husband are fairly tall.

There were some nice touches as well such as club heads for coat hooks and golf ball key rings for room access and the bathroom again, whilst not the biggest was perfectly adequate and a good power shower helped too.

A comfortable night’s sleep (aided certainly by not being awoken by one of the brood who had been left in the care of a most appreciated mother-in-law) was followed by another glorious sunny morning. There was notable corridor noise from around 8am which we expected being near to the lift and ice machine but it wasn’t too intrusive.

We headed down for breakfast to a busy restaurant but the team are evidently very accustomed to this mass arrival of guests. We were seated quickly and advised on the format for breakfast and provided with fresh tea/coffee and toast. There was a full continental breakfast option and plenty of fresh fruit on offer on the buffet and we had our hot breakfast order taken in good time too. The order arrived hot, accurate and overall pretty tasty and set us up for the day ahead.

We spent the rest of the day wandering around the local shops in Carnoustie. We were fortuitous as it was the culmination of their Gala fortnight and the parade was in town that day so the town had a great atmosphere and a real community feel to it. 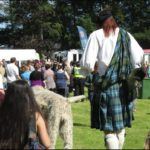 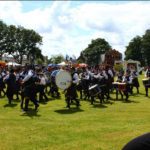 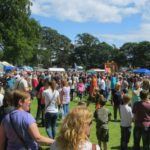 We finished off the afternoon with the obligatory Irn Bru ice-cream ( a must try! ) and a visit to a local golf shop… ( wondering if my boss is moonlighting… )

Late afternoon I had booked myself in for a relaxing massage. The familiar scents and quiet of entering a Spa area were not lacking at all at Carnoustie. What it could perhaps do with is a formal Spa reception area but the signage was clear enough to the Relaxation room where I based myself at first. I was soon met by Lorraine who introduced herself and then took me to my treatment room. The room itself was adequate for sure though it was missing something, perhaps not just as much of a luxury feel as other spas I have been lucky enough to experience. Perhaps better sound proofing on the windows may have helped -it was a blustery day outside for sure though. That along with better lighting would assist – and when I say better I don’t mean brighter, I mean more mood lighting as it felt a little lacking in warmth perhaps. Lorraine explained all the various massage options available from invigorating to balancing, from relaxing to detoxifying. I opted for relaxing… I’d had a busy morning after all! So oil essence of Lavender, Chamomile & Sweet Almond soon filled the air. After I got changed and snuggled under the fluffy towels on the treatment table, Lorraine entered the room again and got to work. I have to say, she did a great job and had the perfect balance of tone and sensitivity from both her dialogue and the actual massage itself. I could happily have stayed there all day, but after the hour long indulgence I had another half hour in the relaxation room to ensure I was fully chilled out. The only area for improvement here I would say would be to replace the old CD player they use as it “stuck” a couple of times and I would have thought piped music would be more fitting for a hotel of this standard. Overall though a lovely experience.

After a couple of drinks in the room prior to dinner ( where we viewed a lovely wedding party that had arrived and were commencing the revelries out on the drinks terrace)  we headed down to the Calder’s Bistro restaurant for our reservation at 7:30pm. Again, we were seated quickly and efficiently and the menu options conveyed enthusiastically and persuasively by the attentive team.

I plumped for the Fish Cake embedded in Cullen Skink for starters – a fantastic combination which worked really well with the Cullen Skink section thick enough so as not to need a soup spoon. I decided to be a little adventurous on the main meal and opted for Venison option which sat on a pillow of mashed potato and cabbage with a bottom layer of haggis. It was cooked to perfection and served with a lovely Pink Peppercorn sauce. Just to ensure I had tested everything thoroughly I had to have some desert.. (Ahem….) – I had spotted the Eton Mess on the menu earlier and really wanted something light so this ticked all the boxes. This was probably the only element of dinner that I was perhaps a little disappointed in. Mostly so because it wasn’t “messy” – two neatly stacked meringue rings with strawberry coulis and a few full strawberries to decorate. It was pleasant enough but lacked the “wow” factor that accompanied the other courses I would say. The accompanying Prosecco was lovely as well and our glasses were never empty for long thanks to the attentive service. 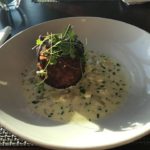 Feast for a King…or just a hungry Queen! 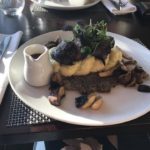 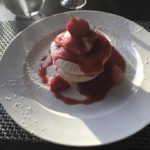 After a couple more drinks in the bar after dinner we retired for the evening with contented bellies and carefree minds – ideal for a relaxing break away.

Breakfast the next morning was similar in most aspects to the first morning although it was all buffet breakfast style rather than table service for the hot option. I actually prefer this method for breakfast so this suited me better and no doubt helped relieved pressure on the restaurant team on this very busy morning.

Check out was again a very professional yet friendly affair and the team at reception were keen to ensure we had a good stay and that everything was as it should have been – and to all intents and purposes it was.

The hotel has had significant refurbishment in the public areas and this is quite demonstrable. I’m looking forward to seeing the complete article when the bedroom refurbishment is completed in spring of next year. It’s easy to see why the hotel performs so well from a customer service point of view as every single member of the team were attentive without being intrusive, polite without being overly formal – a great combination from a well-trained team.

Many thanks to Colin and all the team at the hotel for such a fantastic much needed break away.

If you like golf, or even if you don’t I doubt you would be disappointed by a visit to this hotel and to the charming town of Carnoustie and with some of the amazing offers that we have on myhotelbreak.com you don’t need to be a championship golfer to afford to stay here either!

Click here to see some of the special offers we currently have at Carnoustie Hotel & Golf.